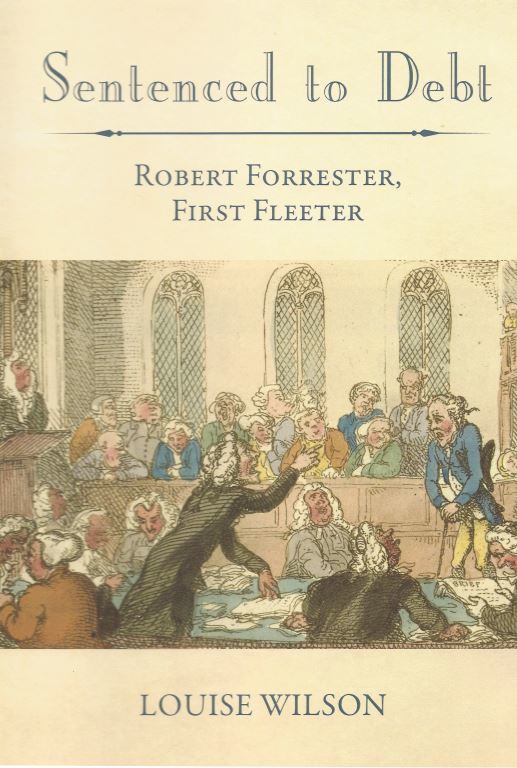 When Robert Forrester moved to London in the early 1780s, he was a ‘nobody’ in terms of documented history. A judgment at the Old Bailey in 1783 turned him into a ‘somebody’.

Along with hundreds of other men and women whose homeland did not want them and forcibly expelled them, in 1787 he was loaded aboard one of the First Fleet ships bound for the far side of the world. They anchored in Sydney Cove on 26 January 1788. An astonishing new chapter opened in the long story of an ancient continent.

In 1791 selected convicts of good character were allowed to become ‘new Australians’. One was Robert Forrester. He’d escaped his death sentence but his land grant in the Hawkesbury’s ‘valley of floods’ quickly sentenced him to debt. Interactions with the ‘First Australians’, the custodians of his land for 60,000 years, earned him and his partner Isabella Ramsay a permanent place in Australian history. The land grants made in colonial times also sentenced current citizens to a more subtle and ongoing form of indebtedness to the land's original owners.

Be transported by this engrossing true story of a resilient if inadvertent founder of modern Australia.

Comments by judges of Don Grant Award 2020: Louise is a prolific and talented author, having published ten non-fiction books and one novel. 'Sentenced to Debt' is the second edition of her book titled simply, 'Robert Forrester, First Fleeter', which was Highly Commended in the 2009 Alexander Henderson Award (this was before the Don Grant Award commenced). The judges commented that this edition was an impressive work, thoroughly researched, with excellent contextual accounts. These are particularly commendable considering the scarcity of resources that Louise could find on his life. The book covers not just the life of Robert, but the interconnections and relationships of many of those with whom he came into contact. Louise examines and critiques other research in the area, and she presents a detailed study of early European life on the Hawkesbury River, the interactions with the original inhabitants, and the economic impact of the frequent flooding that took place there. Louise also won the 2012 Alexander Henderson Award, and has entered the Don Grant Award three times, earning a First Place in 2016 and Highly Commended in 2013. Louise is the worthy winner of the 2020 Don Grant Award. Judges, Don Grant Award 2020.

Read the book, had trouble putting it down, not only good insight on the struggle of our ancestors but life during early settlement. The most challenging event for me to accept was around the death of the young Aboriginal boy. Thank you for writing the book, you have given me the motivation to look further into the early settlement of our country. Plan to go to Windsor in the near future to get a better idea of the area. Scott Parsons, NSW.

Loved the book. It gave me a better insight to their lives. You have done so much research and put flesh on the bones. Don't get me wrong I have no criticism of the first RF book, I thought it was brilliant, but you have excelled with the new version. Janine Wilson, Tasmania.

An exceptional historical narrative centred on the life of a convict free by servitude and role played in the establishment of the British Australian colony. A thoroughly enjoyable read full of meticulously researched historical facts. I gained a new understanding of early modern Australian history. I was confronted and disturbed by the aboriginal land dispossession and killings, hard reading, especially since we have been recently reminded that injustices are still occurring. Nicholas Dennis, QLD.

Thank you so much for 'Sentenced to Debt', it has been well worth the wait. I read it from cover to cover in one day and have dipped into to it to re-read sections several times since then. What a mammoth work ! In particular I like the way you have woven accurate contextual information into what is essentially a family story. It is a rare and thoroughly well researched account of the life of one of our country’s founding fathers. It is too often only those who were outstandingly successful, heroic or bad that have so far warranted much scholarly attention. The illustrations, photos, maps etc are amazing and the fascinating little gems of information you have provided are one of the book's true delights.
Your interpretation of Robert’s story is far more sympathetic than I might, initially at least made it. I have struggled to come to terms with Robert’s killing of the Aboriginal boy in 1794. You have given a more empathetic perspective than I might have done. I know that it should rightly be seen in accordance with the culture at the time. I guess I feel that I carry some inter-generational guilt about this incident. Sue Sacchero, WA

I have read it twice as well as re-reading your previous 3 books which has made it easier to fully understand the daily, weekly, monthly despairs, joys and how the new colony went about establishing what is surely a world first when you compare with the early ventures to the New America. Certainly the earliest ‘settlers’ had a rough time. Tools suitable for the English farming were no match for the hard soil, the ironbark eucalyptus, the local indigenous peoples, floods, droughts, vermin. You name it those early settlers endured more than anyone today can imagine. Louise, you expressed life so graphically, your enormous research then turned it all into a ‘great read’. Congratulations. Geoffrey Steer, UK

I have recently finished reading your book ‘Sentenced to Debt’. I thoroughly enjoyed the read, especially having read your 2009 publication. I have arranged for your book to be sent to my brother David for his birthday. I told him he definitely needed 2 book markers, one for your reading page and the other for the endnotes section. Loved it. So many thanks. Barbara Duncan, NSW.

You read about books being ‘page-turners’, to be read non-stop. I’ve never felt that way about a good book. I take my time to get as much as possible out of the journey, fearing it will end too soon. Your book has been a wonderful journey, but it has now ended. Once again Louise, your research has been outstanding, and you have in your masterly way, bridged the facts to give great continuity to Robert’s story. I’ve been thinking about 1794 and the death of the Aboriginal boy. We will never know what was going on in Robert’s head that day, and what pressure of the moment was applied by his neighbours when he fired that shot. It was wrong, but I can’t help but feel Robert probably regretted it for the rest of his life. Your ‘Retrospect chapter’ works very well. Ian Nicholls, NSW.

Louise Wilson’s second work about Robert Forrester puts flesh on his bones. And what flesh! Such a detailed account with colour pictures and maps is truly astonishing! The level of detail involved in the research is mind boggling! He and Isabella Ramsay experienced such travail with the many Hawkesbury floods where they held land, lost pigs and grain, falling into ever increasing debt, that I had to stop reading for many days to soothe my ruffled feathers. During the few years I lived in Australia I was lucky to visit Windsor twice, to wander the town and the grounds of St Matthews and to marvel at the link to Samuel Marsden, whose reputation this side of the Tasman is so different. Not everyone, I have found, has such a taste for history, whether personal or political as I have, but for those who do have, in this luxurious work ‘Sentenced to Debt’ they will find ample grist for their mill. Helen Harrison, NZ.

Just finished 'Sentenced to Debt'. A wonderful insightful book. Have you ever thought of turning it (a version of it) into a PhD thesis? It’s certainly worthy in my view. Dr Stuart Hamilton, ACT.

'Sentenced to Debt' provides a fascinating and meticulously researched insight into the earliest days of the colonial experiment that was New South Wales. In a useful corrective to the standard 'rags-to-riches' tale, author Louise Wilson has accurately captured the hardships and setbacks endured by her convict ancestor, Robert Forrester, while at the same time providing a compelling and thought-provoking read. Recommended for any fan of Australian history. Michelle Scott Tucker, author of Elizabeth Macarthur: A life at the edge of the world

What an incredible piece of work with so much researched detail, you should be very proud. Once I devoted time to read, I had trouble putting it down each day, I felt you were taking me back in time and as silly as it seems I felt part of it or imagined I was. You have pieced together history in a very readable way. John Daley, VIC

I have just finished reading your book and would like to say that it is nothing short of brilliant, in so many ways. Grahame Phillips, QLD

This second version of the very successful book ‘Robert Forrester, First Fleeter’, which was published in 2009, benefits from another ten years of thinking, the work of other researchers and feedback from my readers over the past decade. The book is a totally Australian-made production, professionally edited by Dalida Boustead and Ev Beissbarth, designed and set up by Sylvie Blair of BookPOD and printed in Melbourne.

A great deal more prominence has been given to the Aboriginal story and to Governor Arthur Phillip. The women have a much sharper focus too, especially the remarkable Isabella Ramsay. Time, money and effort has gone into investigating Robert’s origins, including the use of DNA testing. The content of most chapters has been substantially revised, especially the chapters covering the 1783 trial at the Old Bailey, the location of Robert’s 1791 grant on Norfolk Island, the location of Robert’s 1794 land grant at the Hawkesbury and the 1794 and 1799 killings of the Aboriginal boys at Cornwallis.

The process of refining the narrative, always keeping the focus on Robert and Isabella, has brought radical changes in emphasis with each new piece of material unearthed. Identities and chronologies have been sorted out and almost every page contains an amendment, major or minor. The result is a fundamentally different book, with 114 illustrations and 32 maps in black & white and colour, hence the new title.

This biography offers a detailed case study of the first four decades of colonial Australia, offering a new perspective on this historical period. It aims to engage a readership well beyond family history circles, including historians, local historians, school students, teachers and librarians, even future playwrights and filmmakers.

The book is now available. Please click this link.

'Sentenced to Debt: Robert Forrester, First Fleeter' was to have been launched by the Hawkesbury Historical Society in Windsor, NSW until COVID-19 put paid to that idea - but is available through the Hawkesbury Regional Museum, at 8 Baker St, Windsor.